5 Reasons to Get a Chimney Inspection 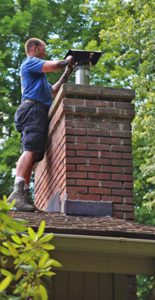 Once you have inspected and cleaned as many chimneys as we have you realize there is a never ending story of what you might find in a chimney inspection.

There’s the usual creosote buildup that just about every type of fireplace produces and every chimney collects that, if left alone, will turn into a real fire hazard.

There are also the bird and squirrel nests that are built inside the chimney stacks for hiding as well as raising their young that can sometimes be a challenge if found during the wrong season.

You may also run into both large and small debris if there is no chimney cap or cover or the current one has been damaged. All of these are somewhat expected. The fun and real challenge comes from the unexpected things found in the chimney inspection.

Self-explanatory. You either believe or you don’t. Either way, do it for the kids!

The most recent find from one of my chimney sweep colleagues was a stack of bird carcasses about 18 inches deep right on top of the flue. It seems the family could no longer open it. When they were asked if they smelled something or heard birds coming from the chimney the answer to both was yes. However, it took them almost a year to call someone to do an inspection and investigate!

So the lessons of the day are; if you smell any type of odor coming from the chimney or fireplace, please give us a call. You may be harboring a dead animal or animals as the family above had been. If you hear birds chirping and flying in your chimney there is a good chance they are also nesting in the chimney and they need to be moved elsewhere unless they are chimney swifts, which are protected under Federal law. In that case we have to wait until they migrate in the fall and then come back, clean the chimney and put a cap and or cover to keep them from nesting there again.

As you can see, there is much to be learned when inspecting and cleaning a chimney. If you have any questions or concerns make sure you contact us today. We’d love to talk to you and see if we can help.