Why does my chimney stink? 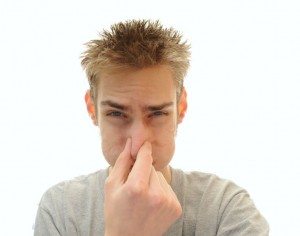 When the temperatures get hotter in the summer, you may notice unpleasant odors coming from your fireplace. This is because warmer weather can stir up smells inside your chimney. Certain things in the interior of your chimney can cause it to become smelly, and we at American Chimney & Masonry in Portland are often asked every summer about the common causes of a stinky chimney. While some chimney odors are completely normal, your chimney should never be so stinky that the odors enter into your home. Some types of chimney smells may even alert you to an underlying problem. To help you cope with a stinky chimney, we would like to tell you a few of the common causes of chimney odors as well as how we can help you get rid of these bad smells from your fireplace.

Large creosote deposits are the main cause behind chimney odors, according to Chimneys.com, an online resource for homeowners and chimney professionals. The strong, acrid smell of creosote odor tends to get worse in wet weather or in the summer because your chimney is less effective in drawing this unpleasant smell up and out of your chimney. Moisture will worsen the creosote odor, so if your chimney is missing a chimney cap, you will most likely have to endure a stinky chimney each time it rains. The CSIA-certified chimney sweeps at American Chimney & Masonry can rid your chimney of deposits of creosote accumulation during our annual chimney sweeping. However, you should know that creosote can penetrate your chimney lining so there may still be odors remaining after the sweeping. To keep the creosote odor out of your home during the summer, you can disconnect the stove pipe and sticking a metal cap in the thimble, or the hole in your chimney. Blocking off your chimney during the summer in this way can go a long way to keep bad smells from drifting into your house through the fireplace.

When animals like birds, squirrels, and raccoons have made a home inside your chimney, the debris and droppings from these animals can give off unpleasant odors and cause a stinky chimney. In a worse case scenario, an animal can become trapped and die within your chimney. Not only can this be a fire hazard within your chimney, but the stench of a dead animal can be unbearable. If you suspect your stinky chimney is caused by either living or dead animals, call American Chimney & Masonry, and we can recommend a professional animal remover to take care of this problem for you.

Is your chimney having problems with water leaks? If so, there is a good chance mold could be growing inside your chimney. Mold can present a dangerous health hazard to you and your family, and it also creates that distinctive musty odor. Most people are familiar with the smell of mold, and if you do ever notice the tell-tale smell of mold coming from your fireplace, you probably have mold growing within your chimney. Because breathing in mold can cause serious respiratory problems, you should contact American Chimney & Masonry as soon as you suspect possible mold growth in your chimney.

Do you have a stinky chimney? Do not hesitate to contact American Chimney & Masonry here so that we can inspect your chimney and clean it to get rid of those unpleasant smells.

Located right here in Portland, Oregon, our chimney sweep technicians provide the best in chimney cleaning, fireplace installation and dryer vent care in the Greater Portland-Metro area. From North Portland down to Tualatin and Oregon City in the south, from Pleasant Valley in the east to Beaverton and Sherwood in the west – when it comes to your chimney, fireplace and vents, we hope you’ll call American Chimney & Masonry!

Ready To Make An Appointment?

To schedule an appointment with one of our expert technicians, please call 503-644-0393 or fill out our online scheduling form. With over 19,000 satisfied customers since 1989, we are ready for more! We look forward to visiting with you soon about your fireplace and chimney sweep needs.