Dryer Vent Buildup and When it’s Time to Clean

Dryer vent buildup is nothing to sneeze at, although it could be contributing to poor air quality that is causing you to be so blessed! If the vent is blocked, warm air is backing up in it, releasing odors from the debris at the heart of the problem. It is also leaving more dust particles in the laundry room, escaping inevitably through the dryer door, so – Bless You! – and have the vent cleaned. 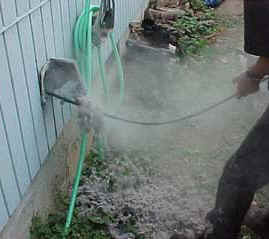 When The Nose Doesn’t Know

Those with less sensitive noses can rely on a number of other indicators to let them know it is time to clean the dryer vent. Among them are:

Any of those early warning signs should let you know it is time to clean the dryer vent. If it is less than eight feet and runs straight outdoors, you can probably clean it yourself with a good shop vacuum. Longer than that or jointed in right angles, as is so often the case with modern homes and apartments, and it needs professional attention.

How often that will need to be done depends on a number of variables, including the load on the vent and blower strength. Obviously, dryers that get more use send more lint through the vent, so they need more frequent cleaning than seldom used ones. A strong blower may be able to force lint all the way out of jointed venting while one with less power leaves it trapped.

Whoever ends up doing the cleaning, it is important that it be done, since dryer vents are a main cause of house fires. When blockages become extreme, the heated air has nowhere to go and can ignite the lint that is trapping it. Luckily, you can count the affordable and reliable vent cleaning services of a chimney sweep among your many blessings.