The Legends of the Luck of the Chimney Sweep

You may have heard that chimney sweeps bring luck with them, and you wondered why a chimney sweep would be so lucky. At American Chimney & Masonry, we are asked this question all of the time. Many Americans have not heard these legends as they all originated in Europe. In England, it is considered to be very lucky for the bride and groom to see a chimney sweep on their wedding day. Even more luck is passed along if a chimney sweep kisses the bride or shakes the groom’s hand. We would like to share with you three legends of the luck of the chimney sweep for your reading enjoyment. 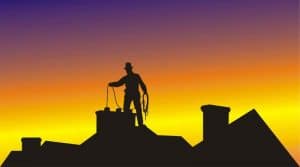 A Chimney Sweeps Saves the Life of King William

Want to know our thoughts of the legend of the luck of chimney sweeps? Contact American Chimney & Masonry to find out more about these legends.