The Origins of the Chimney Sweep

For centuries, chimney sweeps have been removing soot and ash from chimneys, performing important tasks that the average person is not qualified to do. Modern-day sweeps do this and much more and they go through a lengthy training process to become qualified. Are you wondering how this unique profession came to be? 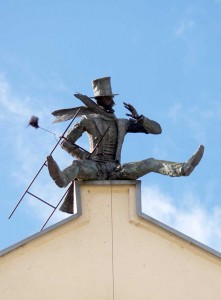 When the first official chimney sweep originated is unknown. However, there are legends that mention sweeps in as early as 1066 and British homes were built with chimneys beginning in approximately 1200. Once the burning material changed to sea coal, the services of a chimney sweep were needed. When burned, this coal deposited a flammable creosote layer inside the chimney flue and the area became covered with soot.

As more houses were built with chimneys during the Industrial Age, more chimney sweeps were needed. Unfortunately, chimneys had also become narrower because they needed to draw the fire. The average adult could not fit into this crevice so boys as young as four climbed into the hot flues. With the space as narrow as nine inches, even some boys got stuck and eventually burned or suffocated.

This and the repeated exposure to soot, which is a carcinogen, caused increasing concern for these “climbing boys.” Acts of Parliament were eventually passed to ban master sweeps from using these apprentices. A mechanical sweeping machine was invented in the early 1800s and this chimney sweeping brush is still used today.

Chimney sweeps were once portrayed as heartless and abusive to children. The perception has come a long way, as they are now viewed as good luck charms and must be highly educated. Services of these good-natured individuals are still called upon throughout the country by homeowners with fireplace and wood stove systems. To this day, sweeps are even asked to attend weddings as good luck charms.