The Dangers of Water Leaks in Your Chimney

For some people, a water leak in the chimney is just an annoyance that can be ignored until it presents a more serious problem. Unfortunately, the water leak is often already causing serious damage that the homeowner simply cannot see. If there is any indication of a leak in the chimney, it is important to have it corrected as quickly as possible for the sake of the home and everyone in it.

Of course, the most obvious problem with water in the chimney is the structural damage that it causes over time. If left to soak, the brick and clay making up the chimney will begin to wear and crumble away. This could eventually lead to a dangerous collapse that would compromise the structural integrity of the entire home. This may seem like an issue that takes years upon years to develop, but it can actually escalate quite quickly without the proper attention. 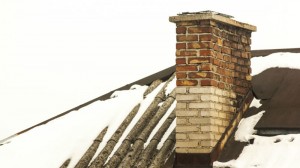 Most people who use their fireplace on a regular basis know how important it is to keep it dry. What they may not realize is that water in the chimney can quickly drip down and become water in the fireplace. Even a small amount of water can have an adverse reaction when heated up alongside dried wood. It can cause large amounts of smoke to come straight through the fireplace and into the home rather than up and out through the chimney.

Another thing to bear in mind is that standing water is the perfect breeding ground for mold. Mold growing in the chimney is just as dangerous as it is in any other area of the home. There are many types of mold that can cause serious respiratory issues as well as other health problems. Many of these molds do not have strong odors and a homeowner may not even realize they are there until someone in the family has already become ill.

Even once water is in the chimney, it will change with the changes in temperature. If the fireplace is not used for a period of days during the winter, the water will freeze and thaw as the temperature goes up and down. This causes the inside of the chimney to expand and then retract over and over again. This will eventually lead to cracks in the fireplace, which, again, compromise its structural integrity.

Not only do cracks make the chimney less sturdy but they make it less efficient and, in many cases, downright dangerous. When there are cracks in the chimney, material cannot move through it as it should, including highly combustible particles. If these materials cannot move through and out of the chimney the way they are supposed to, they may lead to a very dangerous house fire.

A small leak in the chimney may seem like a small problem compared to everything the average homeowner faces. However, even the smallest of leaks can lead to some of the biggest chimney problems. It can make the entire structure less sturdy and reliable, while making it the perfect environment for a violent fire to start. In addition to the obvious, physical problems that it causes, it promotes the growth of mold, which can make everyone in the home extremely ill. Even the smallest leaks should be taken seriously and corrected immediately.