What is the Difference Between a Chimney Surround and a Chimney Cap?

A chimney surround, sometimes called a chimney chase, is the box which encases the metal pipe or flue stack of a factory made chimney. Running up the side or interior of the house and extending above the roof, the surround is generally what we think of as the chimney itself. A chimney cap, on the other hand, covers the outer opening of the flue at the top of the stack. 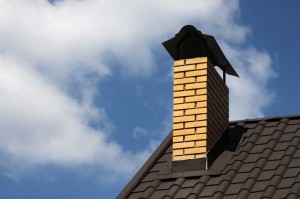 Chimney caps can be made of different metals, ranging from inexpensive galvanized steel options to pricey copper models. Galvanized steel chimney caps can rust quickly. So, while they may be less expensive, the cap will probably have to be replaced more often. For all but the very wealthy, aluminum and stainless steel caps are the most popular, with stainless steel being the most cost effective choice.

Like aluminum, stainless steel is unlikely to rust and is a heavier and stronger material, more able to handle wind, rain, and snow. Not to be confused with a chase cover, which is a box top for the chase, a chimney cap tops the flue itself. This is essential because, without it, water can enter the flue and moisture can penetrate the space between its layers.

Beyond protecting the chimney from the damage caused by such moisture, chimney caps also reduce the unpleasant smells that can come from the chimney as a result of constant dampness. Usually fitted with metal screens, they also keep birds and small animals out of the chimney. They can also improve the chimney’s draft in high wind situations which might otherwise cause a downdraft of smoke back into the house.

Basically, every chimney needs a cap, but that is not to say that there is no downside to them. Screens can become clogged, either by nests or debris or by the soot and later-stage creosote that builds up. Further, a poorly designed or incorrectly installed cap may result in inefficient drafting.